In this latest edition of our Why I Adore series, comedy writer, performer and presenter Sean Lynch waxes lyrical about his love for the John Edwards/Southern Star universe of Australian dramas – most recently brought to life in AACTA nominated drama series Tangle, starring Justine Clarke, Kat Stewart, Ben Mendelsohn and Matt Day. 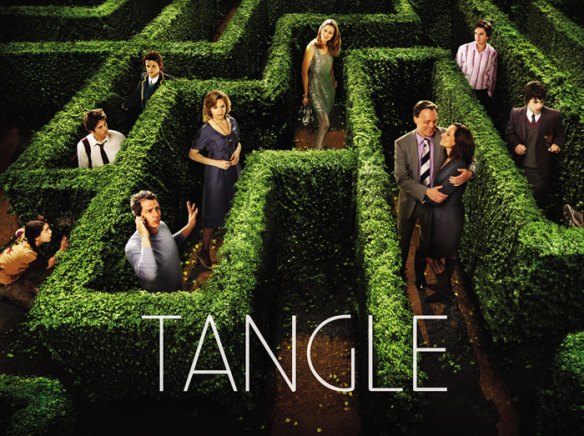 The search for truth

If I’m being 100 per cent honest with myself – and it’s rare that I am (as far as I know, I’m a 74 year old Asian woman) — the reason I adore Tangle isn’t so much because of its own stand alone perfection, as it is for its association with sister series Love My Way and, to an extent, the entire John Edwards adult drama universe (from Secret Life Of Us through to Puberty Blues).

It’s very much the same reason I adore Woody Allen films: you can change the title, character names and packaging all you want, but at their core they’re all part of the same story; all searching for the truth at the centre of characters and ideas created by their writers long before the product in question was even considered.

In the first series of Tangle (aired on subscription television channel Showcase in 2010) Vince’s best friend Gabriel (Matt Day) has secretly been in love with Ally since their high school days, and when faced with the ultimate moral dilemma (love versus loyalty), Gabriel finds that he is unwilling to cover for (one of) Vince’s affairs with a local school mum.

Mixed in with all of this scandal is the fact that this school mum’s daughter Charlotte (Georgia Flood), is involved with Romeo and his cousin, Max (Blake Davis). Did I mention that Max is the result of an affair between Tim (Joel Tobeck) and Ally’s sister, Nat (Kat Stewart)? Tim and his wife Christine (Catherine McClements) are raising Max as their own, but boy, you wouldn’t know it half the time!

What we have are three families colliding, connected via a web of love, sex, money and politics – almost to the point of suffering from soap opera syndrome. The number of “Tangles” in question becomes almost TOO coincidental to really be believable at some points. But with characters this well written, that’s just part of the fun.

A talented young cast bring teen storylines to life, in contrast to the 40-something dramas of their parents.

Edwards does like his archetypal characters and setups, and Tangle is full of them right from the outset: the uptight passive aggressive woman with control issues (Asher Keddie’s Julia Jackson in Love My Way versus Tangle’s Catherine McClements’ portrayal of Christine Williams); the heroine finding solace with her ex’s brothers (Brendan Cowell’s Tom Jackson in Love My Way versus Tangle’s Kick Gurry as Joe Kovac); a troubled born-out-of-wedlock child dealing with the concept of multiple parental figures and family units (Alex Cook’s Lou Jackson and Sam Parsonson’s Dylan Feingold in Love My Way versus Blake Davis’ Max Williams in Tangle); burgeoning teenage homosexuality (Dylan versus Max); the lingering effects of grief after a sudden death (Love My Way’s tragedy versus Tangle’s own dramatic death)… and that’s hardly the end of the list.

For many, this type of rehashing could be seen as little more than weak writing, a creative lull or even a quick cash-in by producers after the success of a break out hit (which Love My Way certainly was). However, it’s for this exact reason that I adore Tangle.

By “starting from scratch” with Tangle, the writers can continue to explore these deeply flawed, endlessly interesting characters without tainting the legacy of Love My Way. Yes, the stories of the Tangle universe could have VERY easily played out as Seasons 4 – 7 of Love My Way. But this “reboot” meant Love My Way couldn’t ever veer into the territory of “jumping the shark” or, more importantly, having its audience simply grow weary of the characters’ relentless, increasingly unlikely dramas.

It’s very clear the aforementioned situations have unfolded in the real lives of the writers. They pop up far to often in multiple shows for them not to have been based in experience. So, not only are viewers getting a voyeuristic peek at someone else’s’ dirty family laundry… we are also part of these writers’ decade-long cathartic therapy sessions as they try to come to terms with the guilt, pleasure and pain of the events in question. It’s all there on the page. It’s the ultimate fly on the wall experience if you are willing to join the dots and watch several TV shows as if they were one.

Tangle is also an impressive an achievement at the dialogue level. Aussies have quite an ear for our own voice, not simply for the literal sound… but the rhythms, the cadence, the intricacies of how words run together.

Matt Day and Kat Stewart having a moment in Tangle.

What may sound perfectly normal and award winningly insightful on paper almost NEVER translates when performed in an Aussie accent. Audiences subconsciously detect something’s not right between: “I love her” and “I love ‘ah”. On paper, it looks stupid and wrong, but it’s the difference between honest and believable portrayals of Australians onscreen and the kind of stilted, clumsy dialogue that leaves actors struggling (a perfect example of which can be seen in Tomorrow When The War Began. Excellent actors speaking words and rhythmic structures that young Aussies simply DO NOT speak in).

In this regard, producer John Edwards and the writers he employs, have been able to rise above the pack. It is no coincidence that Edwards has been behind the most highly regarded Aussie productions for over a decade, because he and his superb writing teams stick to a simple rule: understand the rhythms, understand the culture.

As usual, in Tangle the dialogue and performances are spot on. Everyone delivers here, their performances are nuanced and genuinely believable. These are people you have met; these are conversations you’ve had.

For the love of Ben Mendelsohn

There’s a great ensemble cast in Tangle, but the real star is Ben Mendelsohn. Mendelsohn has long been a staple of Aussie productions (and most recently cracked into the USA with Animal Kingdom, The Dark Knight Rises and Killing Them Softly) but never have we been subjected to such a long-lasting dose of his skills as seen in Tangle.

As Vince Kovac, Mendelsohn owns every single scene of the show, even the ones he isn’t in. No matter what the situation, Vince’s sinister, threatening (and oddly charming) vibe exudes throughout every scene, infecting the lives of everyone in both direct and indirect ways.

As a performer, Mendelsohn takes the dialogue into unexpected territory. A fine example of this is towards the end of the last episode of the first season in which Matt Day’s Gabriel finally works up the courage to express his love publicly for Vince’s wife Ally. (Gabriel is everything Vince is not, and vice versa: Romance vs Lust, Brain vs Brawn.)

As Gabriel paces back and forth, spilling his guts melodramatically – Mendelsohn’s Vince sits silently, still, like a lion assessing his prey. He mutters silently, almost as if Gabriel hasn’t earned the respect to hear his words: “You snake in the grass… Me and Ally are bound in ways you can’t even imagine”. In the hands of anyone else a confrontation like this could end up as a fairly stock standard Home & Away level exchange – but Mendelsohn takes it to such a dark, deeply disturbing place. You can see the Tim Burtonesque spooky forest which consumes his mind through his unflinching eyes. It’s raw and gripping and utterly perfect.

A continuing puzzle, an endless universe

Ultimately, why I adore Tangle is simple: it’s only a tiny part of a much bigger puzzle, a picture which will unveil itself in many forms and in many ways in coming years (assuming networks are smart enough to continue commissioning these productions). Tangle is simply a chapter in an ever growing, wonderfully nuanced John Edwards saga that I can only hope and pray continues to expand outwards like this strange old star-littered place we call the Universe.  It doesn’t hold all the answers – it doesn’t even answer all the questions it raises – but just like the lives it depicts… not everything can have a neatly tailored beginning middle and end. All we can do is just acknowledge we are on a journey and – as Happy Gilmore teaches us – “play the ball as it lies”.

… Also, I really just want to be cast in a John Edwards show. Is that too much to ask? So make that happen AFI, that’d be swell. 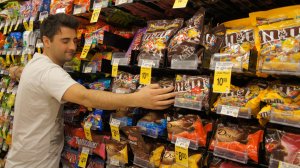 Sean Lynch is a comedy writer/performer, film critic for various publications throughout Australia and Head Editor at WatchOutFor.com.au and WebWombat.com.au. He was one third of the Aria Nominated (Best Comedy Release, 2006) comedy trio The Shambles, a regular presenter on Channel Ten’s The Circle and most recently gave an Academy Award-worthy performance in his gripping portrayal of “Balloon Guy” in Working Dog’s Any Questions For Ben?. You can follow him on twitter @thatlynchyguy but don’t follow him on the tram or at the supermarket, unless you are offering to pay for his groceries or Myki fines.

Note: Tangle Season 3 is one of the four nominees for the AACTA Award for Best Television Drama Series, competing with Puberty Blues, Rake – Season 2 and Redfern Now. The winner will be announced at the 2nd AACTA Awards Ceremony on Wednesday 30 January, and broadcast on Network Ten at 9.30pm.

If you enjoyed this piece, you may like Why I Adore… Love My Way, by AFI | AACTA Editor Rochelle Siemienowicz.