March 17 saw the national release of Griff the Invisible, an Australian romantic comedy with a spunky superhero twist. The feature debut from writer-director Leon Ford stars Ryan Kwanten as Griff, a mild-mannered office worker with quixotic dreams of saving the world. He falls in love with a Melody (Maeve Dermody), a girl as delightfully odd as himself.

Now a local acting sensation, Maeve made her feature film debut in 1993 with Breathing Under Water. Since then, she’s performed on both stage and screen and has earned two Best Supporting Actress AFI Award nominations for her roles in Black Water (2008) and Beautiful Kate (2009). Fresh off the stage from Company B Belvoir’s latest production of Measure for Measure, Dermody is now celebrating her turn as the eccentric and scientifically minded Melody in Griff the Invisible.

Q: What turns you on?
A: Laughter

Q: What turns you off?
A: Bad punctutation

Q: What sound or noise do you love?
A: The sound of a bath running.

Q: What sound or noise do you hate?
A: Jack-hammer

Q: What profession other than your own would you like to attempt?
A: Author/writer

Q: What profession would you not like to do?
A: Air Hostess

Q: The last film or DVD you watched?
A: Father of my Children

Q: The film that changed you, and why?
A: Eternal Sunshine of the Spotless Mind – it’s deeply intelligent while also being funny, honest and moving.

Q: Your guilty television pleasure?
A: True Blood – although I don’t feel so guilty about it.

Q:Can you name three key mentors who’ve inspired or helped you?
A: My Mum, my high school English teacher and the author Siri Hustvedt via her writing.

Q: Complete this sentence: The thing I love about working in the Australian film and television industry is…A: …we are constantly given the chance to reinvent ourselves.

*The AFI Quick Quiz is an Australian screen-centric version of the Bernard Pivot questionnaire. Pivot is a journalist, interviewer and host of French cultural television programs. He developed a list of questions based on Proust’s famous questionnaire. This then formed the basis of James Lipton’s questions to actors on American cable television program Inside the Actors Studio. We hope you enjoy the fresh insights.

Writer/director Leon Ford is quickly emerging as an actor, author and filmmaker on the rise. As an actor you might have seen him in Changi, The Pacific and Beneath Hill 60. Perhaps you saw his Green Room award winning performance in the Bell Shakespeare production of Hamlet (2003). Or maybe you’ve read his novel, What Doesn’t Kill You. Ford’s short film Katoomba (also produced by Griff producer Nicole O’Donohue) received an AFI Award nomination for Best Screenplay in a Short Film in 2007. Now Ford has written and directed his first feature film, Griff the Invisible. We look forward to seeing what he does next. In the meantime, we search for clues in his answers to the AFI Quick Quiz.

Q: What is your favorite word?
A: Presidential

Q: What turns you on?
A: Bookshops

Q: What turns you off?
A: Illness

Q: What sound or noise do you love?
A: A flag in the wind.

Q: What sound or noise do you hate?
A: When someone’s nose whistles when they breathe.

Q: What profession other than your own would you like to attempt?
A: Pilot

Q: What profession would you not like to do?
A: Surgeon

Q: The last film or DVD you watched?
A: Inside Job

Q: The film that changed you, and why?
A: Back To The Future – it just made me want to do something with my life.

Q: Complete this sentence: The thing I love about working in the Australian film and televisionindustry is…
A:…the intelligent people and the optimism. 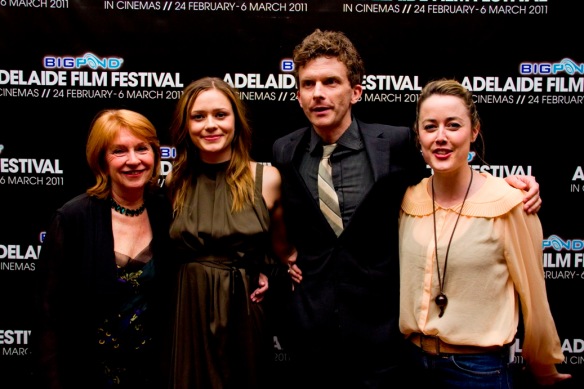 Griff the Invisible is on at the cinema now.